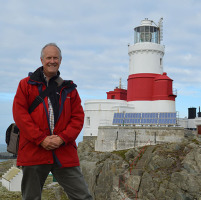 Dr Ken Trethewey is a retired marine engineer specializing in materials in engineering systems. Based in Cornwall UK, he has written books about corrosion engineering, lighthouses and jazz. When he is not pursuing his interest of pharology, he now operates his own publishing business, Jazz-Fusion Books. Ken first became interested in lighthouses at the age of 16 when he discovered that he was descended from a long line of lighthouse keepers – the Knott family of South Foreland. In 1992 he co-founded the Lighthouse Society of Great Britain and in 1994 started one of the first websites devoted to pharology that continues today. From 1998 to 2005 he published eight annual editions of the Lighthouse Encyclopaedia on CDROM which contained information on 13,000 lighthouses. In 2002 he was a co-founder of the World Lighthouse Society and the same year he published a book entitled North Atlantic Lighthouses with the top French photographer Jean Guichard. Besides English, the book was translated into French and German. In 2012, Ken published a historical novel that describes the adventures of the Knott family and infused it with the history of the building of the famous Eddystone lighthouse. Ken’s latest project is a series of books on Pharology. The first was called Ancient Lighthouses and was published in 2018. His latest book - Lighthouses of Cornwall and Devon - presents his lifetime experience of lighthouses in the region he was born and where he now lives.